Learn about the essential elements of a successful screenplay title page and the use of images and profound quotes to stand out from the crowd.

I’m going to go through all the essential elements needed in your screenplay. Once you’ve covered those bases, I’ll talk through a few ways you can make your screenplay title page stand out from the crowd followed by a quick tutorial of how Arc Studio Pro automatically generates a title page, saving you the trouble.

Unlike a novel, your screenplay doesn’t need to have a fully illustrated cover page. Instead, a screenplay page is usually fairly minimalistic. Here’s the basic template of what a title page looks like: 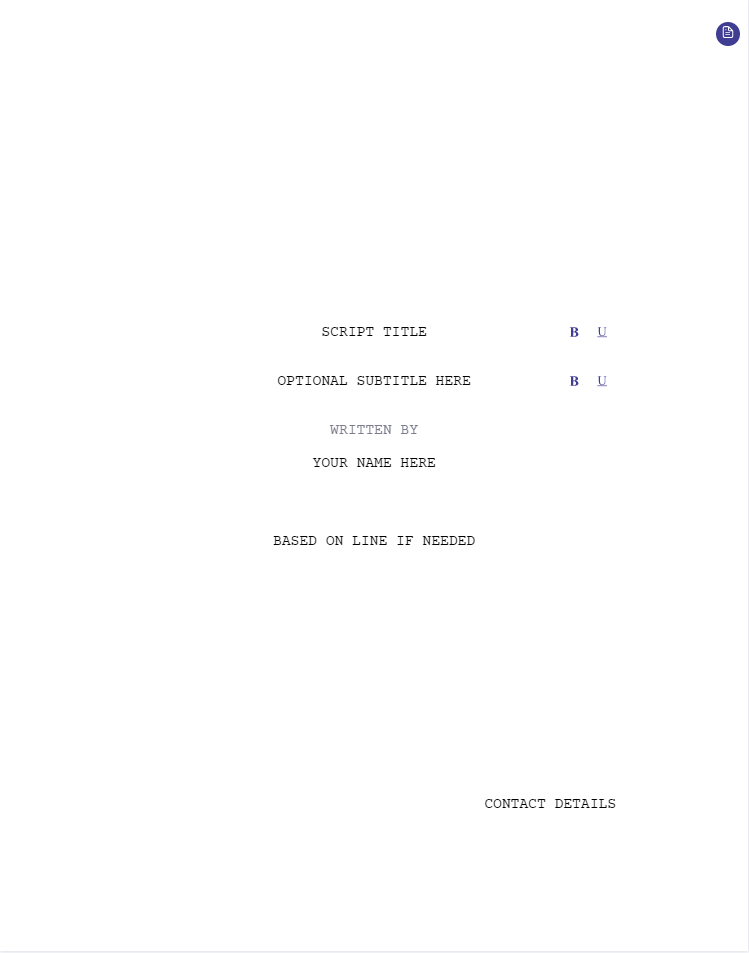 I’m going to break each element down piece by piece, but first, let’s see how it works in practice by using the title page of The King’s Speech as an example: 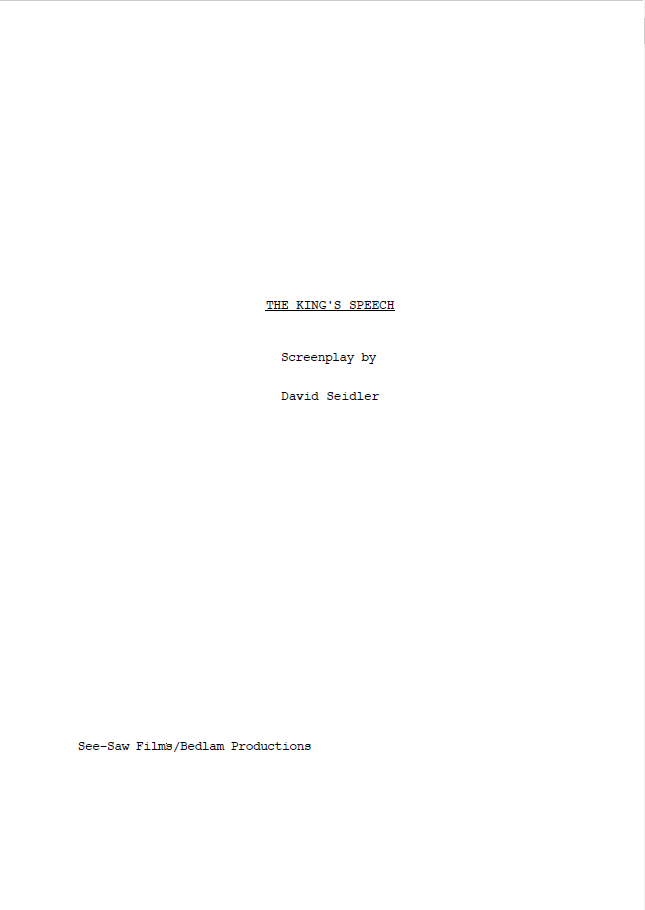 Pretty simple right? Starting about an inch from the center point of the page the title of the script is written in all caps and underlined. Sometimes this is emboldened too. All that really matters is that it’s what your eye is drawn to first.

Below that we have the writer credit. This is specifically segmented into two different sections. The “Screenplay by” part is usually placed very slightly above the center of the page while the name of the writer is placed below. Other variants exist too. Sometimes “Screenplay by” can be “Written by” or even just “by”. If there’s more than a single writer they can share the same line, or one can go on top and one below.

In essence, those are the essential parts of the screenplay title page. The title of the script, and the writer’s name. No matter what script you read, it’ll have those two elements in common. There’s a very strong chance that whatever screenwriting software you use will include a way of editing the title page to include these key components.

However, there are other elements that may be useful to include.

Here’s the title page for The Witch by Robert Eggers:

This title page contains the key ingredients we talked about earlier, but there’s some variations here. Firstly, the title is spaced out and not underlined. The stylistic choice still draws your eye so there’s no problem there. Down and right from the key elements is the date this draft was completed which is useful for differentiating drafts.

The bottom left of the script has a whole host of contact details to make it as easy as possible to make a potential reader to get in touch if they want to work with you. There’s no strict format for what this looks like. Although I’ve blacked out the personal details, Eggers is thorough. He lists his WGA number, followed by a full address, an email address, and a copyright declaration at the bottom. In 2020 this may be slightly outdated, but there’s nothing wrong with just listing your entire address if you want.

The block of information can also be placed in the top corners too if you prefer. Other information to be included might be your management or agency, what kind of draft this is (Shooting draft? Revised draft? Rewrite?), and any other pertinent details you can think of.

💡 Blog – How to Prepare Your First Draft for Feedback

Making Your Title Page Stand Out

Now that we’ve figured out what your screenplay title page needs and what other secondary elements may help, it’s time to get into the fun stuff. How do you make your title page stand out?

Despite the fact that a title page can be very minimalistic (see The King’s Speech title page) the opposite can also be true. If you want to craft a particular mood the title page is a great place to get creative with images or with quotes and prefaces.

First things first, I would not recommend using images if you’re just starting out on your screenwriting path. While it’s increasingly legitimate to do so there’s still a sizable contingent that don’t like an image on the front page. Additionally, for new writers it can sometimes be seen as putting the horse before the cart.

So if you want to play it safe a normal title page will work perfectly. However, some people (like myself) love putting a simple, minimalistic image, in black and white, above the title of the script. Here’s the title page of a script I’m currently working on: 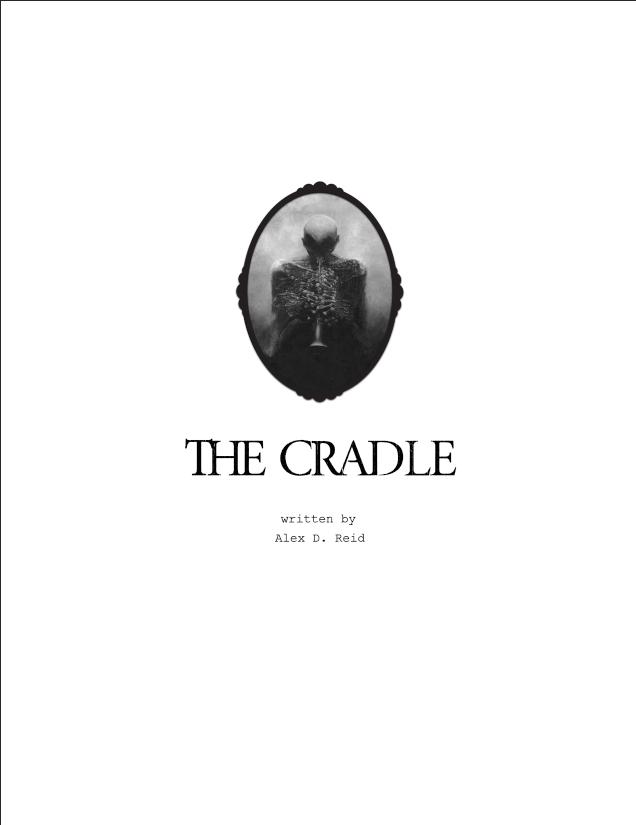 A little different from what came before. In this page I’ve used a different font for the title and I have included a black and white image above. Unfortunately a lot of screenwriting software does not include lots of customization options for title pages, so I had to do this in Photoshop. If you want to include an image on your title page, I highly recommend you keep it in black and white, have it in .png format, and be as minimalistic as possible.

Lots of novels and stageplays have a quote or a preface, so why not screenplays? It’s a fun way of hinting towards the themes your story is going to deal with or the kind of feeling you want to evoke. This quote can either be placed on the title page, or it can have its own space after the title page but before the first page of the screenplay.

In Joker, Philips and Silver’s preface page briefly sets up the world and tone of the upcoming story: 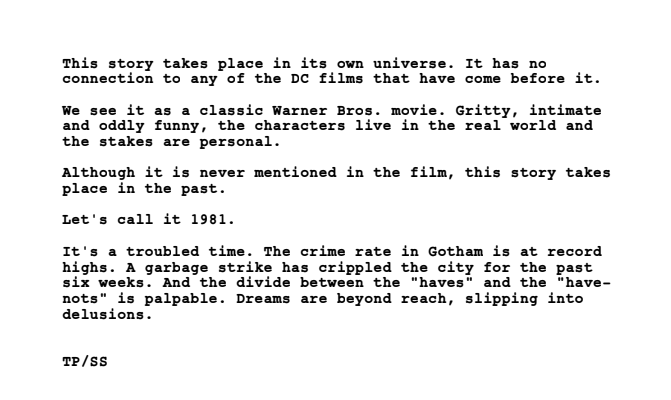 Joss Whedon’s draft of The Avengers has a quote that’s almost bigger than the actual title of the movie: 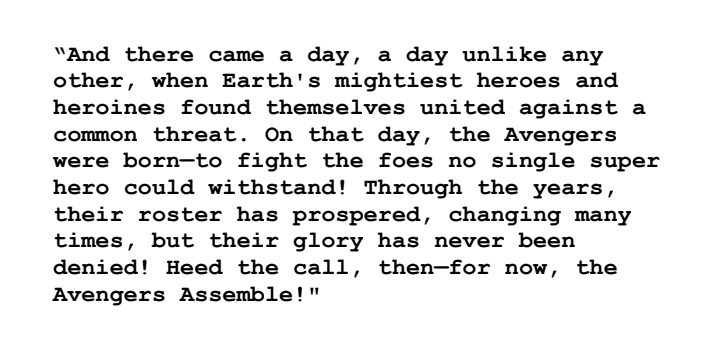 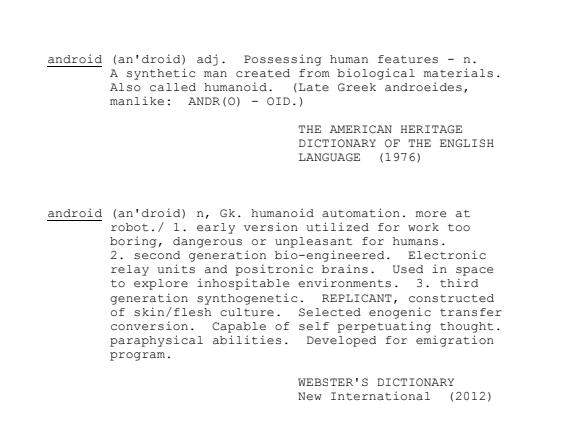 There’s not a lot of space within a screenplay to break from a rigid format. The quote/preface offers the writer a brief opportunity to set the tone of the script before the actual writing begins. There’s no reason not to get creative.

Generating a title page in Arc Studio Pro is really simple. As you start a new script, Arc Studio Pro will automatically enter your name and ask you for the title of the script. Once you input that, your title page is already good to go. If you want to preview or edit the title page, just hit the little gray button at the very top right of your script:

That will bring you to the title page where you can edit the minutiae to your hearts content. Light gray writing on the title page will prompt you to enter potentially pertinent information such as whether the screenplay is based on anything in particular and contact details.

While most of your screenplay is bound to pretty strict formatting rules, the title page is one of the few places where you’re afforded the most opportunity to get creative and express the tone of your script. Make sure you get the basic elements down, add any additional pieces of information as you see fit, then get creative and see what visuals you can integrate and what quotes best fit the tone of your story.

Alex is a professional screenwriter who loves writing horror. He won the horror category at Austin Film Festival for his screenplay Delirium in 2019 and is currently studying for a Ph.D in English Literature with a focus on the horror genre.

Should your story be a Feature, a TV Pilot, or a Short Film?

The Ultimate Guide to Screenplay Formatting

How to Use Myers-Briggs to Develop Authentic, Compelling Characters in a Screenplay

5 Elements Of A Great Screenplay

Should your story be a Feature, a TV Pilot, or a Short Film?

How to Write Dialogue for the Screen